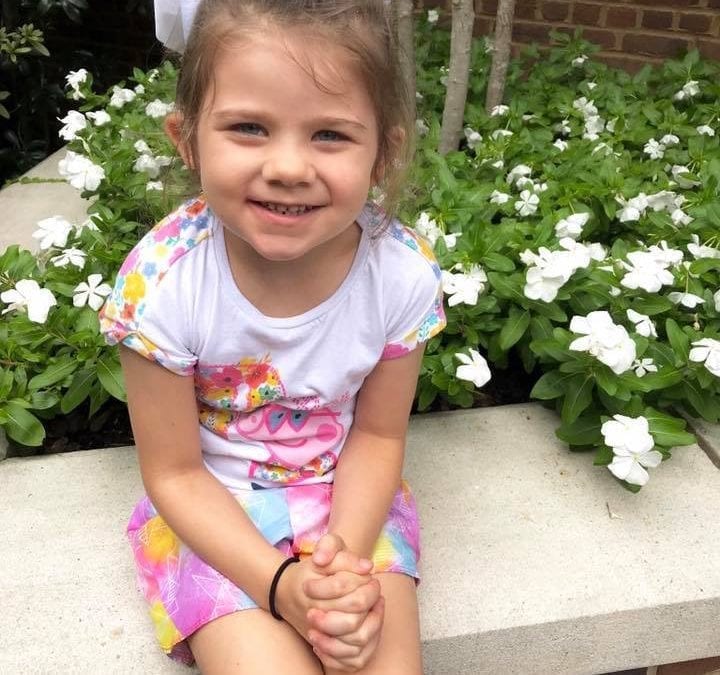 Abagail was born in March of 2014. She is our third little girl so when she didn’t pass her hearing screen in the hospital, like our other two children, we were quite alarmed. We didn’t know but that second day of her life would begin quite a roller coaster over the next two years. At two weeks old we had her hearing tested and basically were sent a brochure for the school for the deaf. Talk about ripping a bandaid right off?!  That result was so alarming we immediately began seeking a second opinion and promptly found out that actually her hearing loss was very mild and that she may not even need hearing aids.

Abagail began developing like a normal child.  She babbled, rolled over, and walked all within the normal thresholds. There were three events that happened within short succession that changed everything. The first happened when a close friend babysat for me and noticed that calling Abagail’s name did not get a normal response. A few months later Abagail began throwing up and got severely dehydrated. We ended up spending two days in the Children’s hospital in Mississippi (where we lived during this time). We found out later that this event is related to her diagnosis of EVA (enlarged vestibular aqueducts). Thirdly, at a church event I noticed another little girl born in the same month calling her older sister’s name. This was the proverbial “straw that broke the camel’s back” for us.

I immediately called her doctor and audiologist and made an urgent appointment. I had to advocate a ton at this point to even get hearing aids for her. Then a few months later when she still was not improving, this same doctor suggested autism as a possible diagnosis. Again, referring to my above statement, she has hit all milestones and I knew beyond a shadow of a doubt that she was in no way autistic.

At this point, what advocating I was doing for my child skyrocketed. I call any and everyone I knew and this is where it all changed. We ended up seeing her surgeon who would implant her just nine months after a “false diagnosis” of autism, and he almost immediately correctly diagnosed her. This diagnosis was confirmed within a few weeks with an MRI.

Abagail began attending Magnolia Speech School and within a few short months of her cochlear implant activation, and the assistance of a hearing aid in her left year, she began to hear sounds. I will never forget that first time she heard the dryer buzz. That was really the first sound she heard and identified!

We found out during this time that we would be moving to Birmingham and so we began seeking and searching for resources. We are beyond blessed to have found Nancy, Susan and Jamie and the Alabama School for Hearing. She began the school immediately when we moved here in July of 2017.

Since being at the school, Abagail has improved exceedingly. She went from a speech age well behind her peers to now being on target with her chronological age. I am beyond thankful for their careful attention to her and her amazing progress. The one on one environment and excellent teaching she has received has been life changing not only for Abagail but for our family. She will and is living a completely normal life in the hearing world. Yes, of course, there are a few things that are a bit different for her using a processer and hearing aid; however, because of the school and their immense work I believe she will be successful in all facets of life.

I can not recommend enough the importance of both early intervention and putting your child in an environment like Alabama School for the Hearing. It has changed the trajectory of our lives and it will yours too.